In recent years, this area has moved from being a new and little-known urbanization in Benahavís to pass through a phase of change and evolution. This is definitely a growing urbanization. Today, Capanes Sur is a consolidated area and already home to Mediterranean villages and luxury villas. What’s more, various building works are still under way. See our selection of apartments and villas for sale in Capanes Sur. 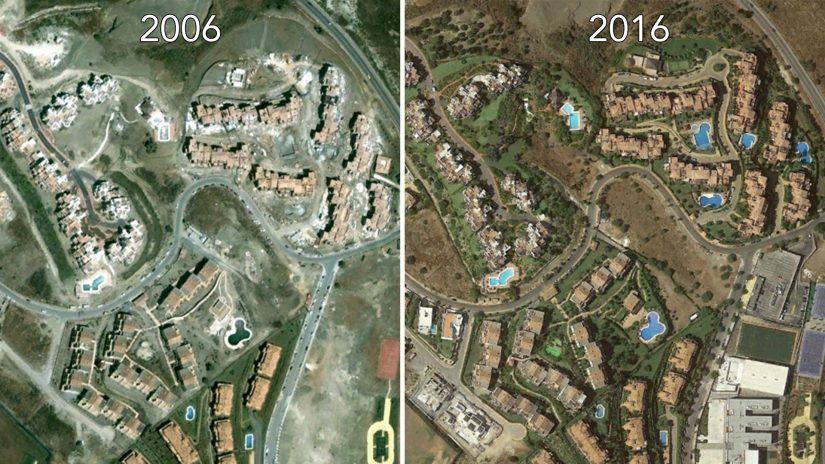 Capanes Sur is often confused with La Alquería, which is a different urbanization that adjoins it. Both are located in the municipality of Benahavís.

Villas and apartments in Capanes Sur

Numerous villas and apartments were built in Capanes Sur in 2005 and 2006. They include 3 apartment complexes, Las Lomas del Marques, Las Lomas del Conde Luque and Gazules del Sol, each with its own individual style. Though there are other adjoining complexes, these belong to Estepona and not Benahavís. The last Andalusian village project permitted in the area, Atalaya Hills, is currently being completed.

As far as detached villas are concerned, in the early years, very few were built. This limited number of villas entered a market that began a major decline in 2008, which would last until 2014. It was then that Capanes Sur saw an explosion of new-builds, especially villas, with more than 27 homes being simultaneously built at that time.

In 2012, Capanes Sur started its consolidation, with the arrival of a Mercadona located at the entrance. In 2015, the opening of Atalaya School finally consolidated this booming area.

Meanwhile, construction began on Mirabella Hills, which would crown Capanes Sur. This is a gated community of modern, contemporary villas that follows the market trend set in Marbella and its surrounding areas during those years.

In the coming years, all these villas will come onto the market, priced between 2.2 million and 3.5 million euros.

At Benarroch Real Estate, we specialise in this region and offer our clients a complete selection of apartments and villas in Capanes Sur. So, don’t hesitate to contact us with any queries.

Modern contemporary design villa located in Benahavis, urbanization of Capanes Sur, next to La Alqueria, an area with security ...

Modern villa located in Capanes Sur, near La Alqueria, Benahavis, an urbanization with security surveillance and mobile patrol at ...

Villa located in Benahavis, urbanization Capanes Sur, near to La Alqueria, a few minutes from Puerto Banus, Benahavis and San ...

Villa in Capanes Sur next to La Alqueria, Benahavis

Villa located in one of the most demanded areas of Benahavis, Capanes Sur, a consolidated urbanization with 24 hour security ...